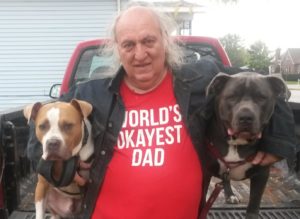 Hi. My name’s Bob. I am just your basic grumpy old man.

It all started somewhere in antiquity. That’s when I was born. I’ve been told my mother was in attendance for the event. I don’t recall personally. I just take peoples’ word for it. After that, I grew old. Typical, boring stuff. Told ya so.

Growing up, I was a musician. Piano lessons starting at age 4. French horn from 5th grade to 11th. Self-taught on guitar, mandolin and banjo. I sang in choirs and chorales in high school and college, and did an occasional coffee house gig. Why didn’t I stay with it? Self-promotion. I hated marketing myself. So, I became a writer. What was I thinking?

Somewhere along the way, I spent time in the US Navy, got married, had kids, got divorced, and raised four amazing daughters alone. Maybe that’s where the grumpiness came from.

I got a PC in 1993. About that same time, I got an idea for a story. Well, not so much an idea, as a “what if. . .” The only way I could find out “what if” is to give the story a chance to tell itself to me. By the time it was done telling me, I had a novel-length manuscript. It was a super-long novel, even by today’s standards.

Then I wrote another one. Ditto on the length. I was content to write for the sake of writing. Eventually, I thought, “Hey, what if (Another what if- two in tandem is where you really start treading dangerous territory) I sell these things. I can get rich and retire young.

I had no idea what I was doing, and that fizzled. By now it’s too late to retire young (see line 1). I kept writing, though. It’s like a virus. No, that’s not it. It’s more like one of those amoebas that eats your brain, turning you into a mindless keyboard-smashing monkey. I’ve read that given a typewriter and enough time, a chimpanzee would eventually turn out a Shakespeare play, or even the New York City phone book. Maybe there’s still hope. How long did it take that chimp? I need twice that much time, because surely, he’s smarter than I am.